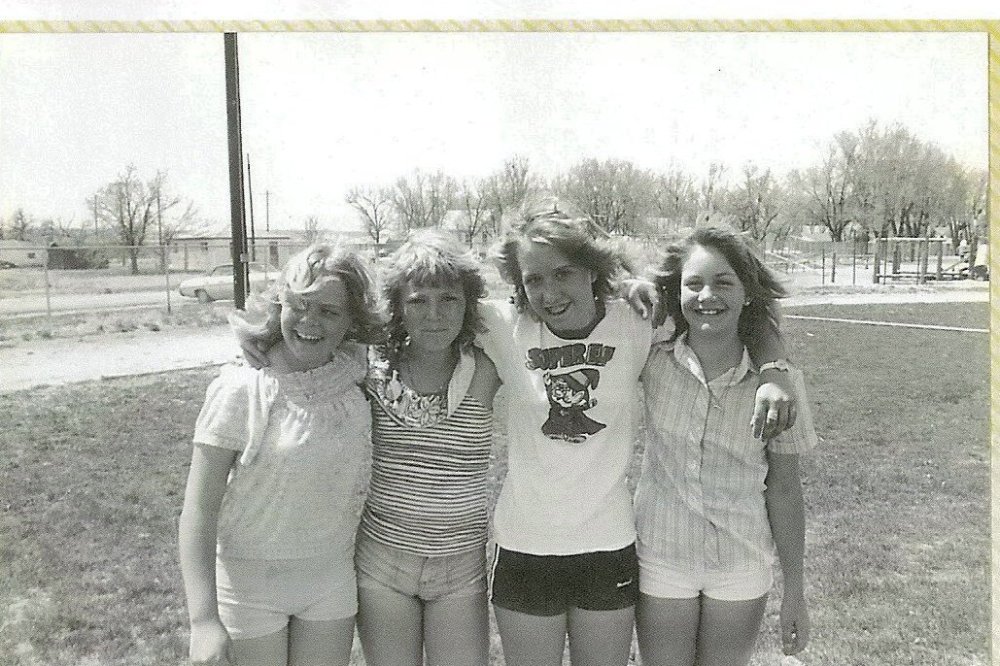 I don’t really remember my freshman year, it all blurred by, but I do know I was busy, but alone. My older sister was in her senior year and all the fun that went with it, and my younger sister spent a lot of time away from home. Since my best friend moved away, I spent more time with my friend Donna. Her family was really good to me. They took me with them anytime they went somewhere; camping, fishing, church, grandparent visits, work, you name it I was there. In fact some of my favorite memories were with Donna and her family. At anytime throughout the year we were finding things to do.

Wintertime on the eastern plains meant snow, cold, blizzards, sunshine, sledding and igloo making. Donna’s dad was really good at engaging us in outdoor fun. He found this old hood of a pickup that he put a seat on and he pulled us around by his pickup when it snowed. It was great fun (most of the time) as long as he stayed on the road, and we couldn’t steer this old hood, so when we went into the deep weeds we got smacked in the face. Anyone knows that when your face is cold, weeds really sting! One time I was on a rail sled and steered right into Donna and she went sideways and hit a mound of snow and went airborne-man she was so mad at me-especially when she saw her dad and me laughing at her!

Spring on the ranch meant the snow would thaw, and the little waterin’ hole would fill up and we would go fishing. We never caught anything, but we nearly died! (Not really, but as kids we thought we were gonna). He were walking around the pond contemplating life and who was going to marry one of the “Johnson twins” when Donna said “STOP”! I thought she was telling me to stop talking, but she saw something I didn’t; I had walked right over a sleeping coiled-up rattlesnake-and he was right between my legs!! I couldn’t move, I froze. All the sudden we hear a little noise that ended up being the rattle at the tail-end of that snake. Donna screamed “RUN FOR YOUR LIFE!!!” We ran as fast as we could, screaming all the way up to the house thinking that the snake was in hot pursuit!! When we finally go in the house and on her bunk bed we looked back, no snake. Whew!! I think we laughed for days over that one.

When the weather looked like it would hold (no more freezes) the bull got moved to the pasture next to the mile-long driveway. Now, anyone who has ever been close to a bull knows that all those “Bugs Bunny” cartoons where bulls paw the ground, stomp their hooves and blow snot are all true! We used to have to walk down Donna’s driveway off the bus, right on the other side of the bull pen. If we were lucky, “Ferdinand” would be in the other side of the pasture, but sometimes he would be near the driveway, and we would have to walk parallel to him. I didn’t believe Donna when she said he would come after us if we look at him, so I tried staring him down. After all, there is a fence between us right??? Wrong. He started pawing the dirt, snorting his snot all over the place and started making the “bull noises” (just like on Bugs Bunny) and started charging…all of the sudden those three strands of barbed-wire fence seemed like cooked spaghetti… I screamed bloody murder and ran as fast as I could to the barn, where I jumped through the split-rail fence and hid behind the old tractor. All the while Donna was yelling “I TOLD YOU SO!!!” So much for my stare-down contest, Ferdinand 1, Heather 0.

Donna’s parents were determined to save us, and I went to church with them often. Their church was very cool to me as they weren’t afraid of standing up, raising their hands, or singing funky songs- I loved it-at least I think I did. Surely it wasn’t that after church we used to stop at The Village Inn for strawberry pancakes! (Don’t judge me!). We stopped one Sunday at Donna’s grandfather’s house, and this I will never forget. There was a strange-looking young guy there, and we were told not to talk about him to anybody, and he didn’t want anyone to see him through the windows. He came from Cambodia (remember The Killing Fields movie?) and somehow he escaped the Khmer Rouge occupation. Grandpa was keeping him safe, and they were trying to find his family, but so far no word. We prayed for him right there in the living room, I never did that before and I didn’t even really know we could. As much as I can remember, the family never made it out. I felt very sad for him and I prayed that his life could be better in the USA.

I had other friends that I spent time, but some of the parents of my friends didn’t like my family much, and I knew that Donna’s family never said no to me spending time with them. Donna and I didn’t always get along, we fought like sisters, but we would always make sure we were together if there was a threat of snow or school cancellation. The sad part of it all was that we were not talking when she moved away. Donna used to talk about moving, but we never believed her; I lost touch with my friend, and her wonderful family. No Facebook, no email, no cell phones back then.

I looked for my friend for years, and I finally found her in 2009. The early morning drive into Denver to meet them all was very magical for me. God made a beautiful sunrise for me, and all I could sing was “How Great is our God!” For 60+ miles through my tears…I don’t think they understood how much they all meant to me, but I sure did tell them. It was amazing catching up, and spending the time with them all. Our next meeting was cancelled out as a blizzard hit and I was stuck and Donna was stuck 70 miles away.

Recently I was driving to Colorado from the east coast when I got a Facebook message from Debbie, Donna’s oldest sister. Donna was succumbing to her struggle with alcohol (just like my mom). I will never forget that drive through the Blue Ridge Mountains in Kentucky when my phone whistled the message. I’m on my way! Please tell Donna I am coming…but I was a day late.

I sat with Donna’s mom at the funeral, and rubbed her back. I stood up and shared some stories from when we were kids in hope that her children and grandchildren could know how much fun and happy Donna and I were as kids. I got to meet her children, and her grandchildren, they were all beautiful. After the service (and the food) Donna and I made our final trip out to the ranch, and I spread her near the culvert where our names were still spray painted (although somewhat faded).

Rest In Peace my dear friend, and tell my mom I love her.

This is a text widget. The Text Widget allows you to add text or HTML to your sidebar. You can use a text widget to display text, links, images, HTML, or a combination of these. Edit them in the Widget section of the Customizer.